COVID-19: Volunteering — a sustainable response to the health crisis 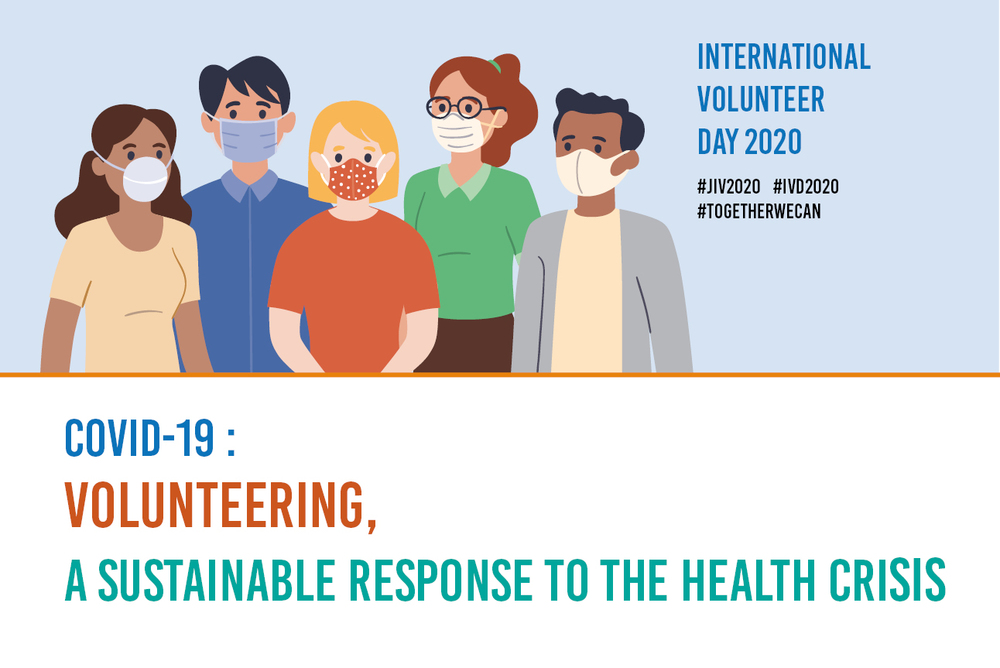 This year’s theme, “Together we can through volunteering” celebrates the commitment of volunteers and their impact during this turbulent period of the health crisis. Below is a list of events organized by France Volontaires connected with IVD.

Volunteering gives everyone an opportunity to play a key and positive role in society. In that context, volunteering strengthens solidarity, inclusion, and cohesion, and promotes the values of cooperation and reciprocity.

Volunteers and the health crisis: Key figures from a study by France Volontaires

In order to better assess the impact of the health crisis on volunteers’ missions, France Volontaires launched a broad survey of volunteers and voluntary organizations this past summer. Unsurprisingly, 80% of the volunteers believe that the crisis impacted their mission objectives and performances  (36% responded “yes, considerably,” and 43% “yes, a little”). Thirty-four percent of the missions were able to be carried out in person, 55% by working remotely. Only 10% of the missions had to be interrupted or terminated. It is noteworthy that half of the missions were reorganized or redirected in order to explicitly respond to the demands of the health crisis. 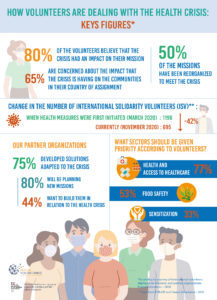 Volunteers on the front line

In this survey, 65% of the volunteers indicated that they were particularly concerned about the impact of the crisis on the communities in their country of assignment.

Within the framework of their mission, and sometimes also their personal time, many of them were actively involved in responding to the health crisis: distributing food and  sanitary kits, raising awareness, coordinating projects, etc. Among multiple initiatives, we can mention:

As well as the video testimonials of:

In addition, volunteers have had the opportunity to be directly involved in solidarity projects recently initiated or amplified by the crisis. Fifty-nine percent of them say that they have witnessed new or existing forms of solidarity revealed during the crisis, or marked by a change in scale: 57% at the initiative of, or organized by, the citizens themselves, and 53% by local associations, or within the communities. More than one-third of volunteers were able to participate in them.

In dealing with the health crisis, volunteer organizations combined their forces, often producing coordinated responses. One figure attests to it: 75% of the organizations surveyed affirm that they worked with other stakeholders to develop appropriate responses for dealing with the crisis (38% responded “Yes, totally,” and 37% “Yes, somewhat”). Seventy-nine percent of them believe that this collaboration translated into the sharing of information on local conditions, and 45% also responded that this collaboration gave rise to the implementation of joint projects. Following are some examples:

Volunteering: A sustainable response to the health crisis and its consequences

Sixty-four percent of the volunteers believe that volunteering is an appropriate response to the crisis, particularly if the stakeholders are well-prepared and the volunteers skilled in crisis management, provided that that they differentiate between humanitarian and volunteer efforts, while making them mutually supportive.

Over the longer term, they feel that the priority areas for action to be invested in terms of strengthening resilience capacities to deal with this crisis, are: the health system and access to healthcare (77%), food safety (53%), and sensitization (33%), but also the development of local agriculture and community organization.

The same response applied to organizations: nearly 80% (78% are thinking of planning them, 19% of them “Don’t know,” but are planning new missions, and 48% of them would like to build them in connection with the health crisis. Early in 2021, France Volontaires will present a full analytical report on its volunteer sector consultation process concerning the impacts of the crisis and the lessons that can be drawn from the adaptations and changes observed in terms of partnership development, technology solutions that need to be found, articulation between different types of commitments, and new forms of solidarity. The platform will thus be able, in cooperation with its members and partners, to adapt its responses to future crisis situations and enhance its actions for developing greater international civic engagement.

For the time being, the gradual resumption of volunteer deployment is giving new momentum to committed stakeholders and some perspective to men and women who want to commit themselves to carrying out missions of solidarity and responsibility.

Some volunteer testimonials about how they dealt with the health crisis:

Lire l'article
All the news